don't jerk me around!

I'm tired of being bad with food.

Don't get me wrong, I'm awesome at eating it. By most metrics I consider myself a good eater: I can eat a lot, I appreciate good foods (loves me some J-Bo), and I can exhibit good manners when required (pinkies up!).

I just can't make the stuff.

Why am I so bad at cooking? I blame my mother. Having a French mom who cooked great meals for you all your life really doesn't set you up for success. Especially since every time after receiving praise for her cooking she's say to me "Sam-u-el (Samuel accented in French), ez so eazy ez stupid". So you can imagine that when I fail to cook it...

So now my goal is to emerge from 2014 if not a good cook, then at least one that has a set of dishes (ideally 5) that I can serve up and have be consistently tasty (ramen doesn't count).

Basically I'd like to learn to prepare food that people want to eat, not because of pity or because I'm holding their family hostage.

I've decided to start this journey with beef jerky.

I bought my (now) wife a dehydrator for Christmas of 2012 (how do you think I earned the title of Romantic of the Year?) because she had mentioned a few times the idea of making her own jerky for backpacking trips.

A year later and not a single strip of meat has graced its trays (she did dehydrate strips of Spam in there, but I consider Spam a food group of its own). It became apparent that if I wanted home-made jerky, I was going to need to be the one to make it (it was also clear because she explicitly stated as much).

A quick search online found a humbly titled article "How to Make the Best Jerky in the World", which somehow felt right.

I obtained all the ingredients, including some lean brisket from our local meat shop. It was really from a huge chunk of brisket (the butcher had originally wanted me to buy all 17lbs of it) and I asked him to cut 1/4" slices from the leanest part he could find.

I created the marinade and threw the meat in to soak up all that flavor goodness. 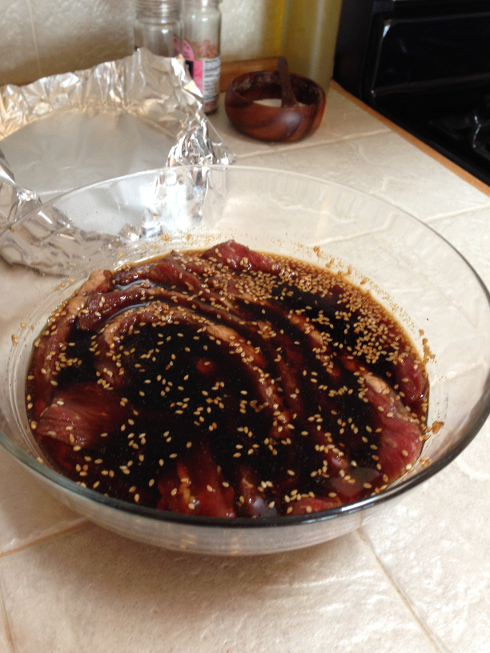 I sent the above picture to a friend of mine who is also exploring beef jerky. Her response, along with commenting that it looked good, was "Make sure you cut off the extra fat".

Oops. Mistake number one. Totally forgot that fat is the enemy of jerky. You always want to get the leanest piece of meat that you can. Since fat doesn't get dehydrated and is the first thing to go rancid it drasitcally reduces the shelf-life of your jerky.

Okay so I knew I'd have to cut fat off the marinated pieces before they went into the dehydrater. 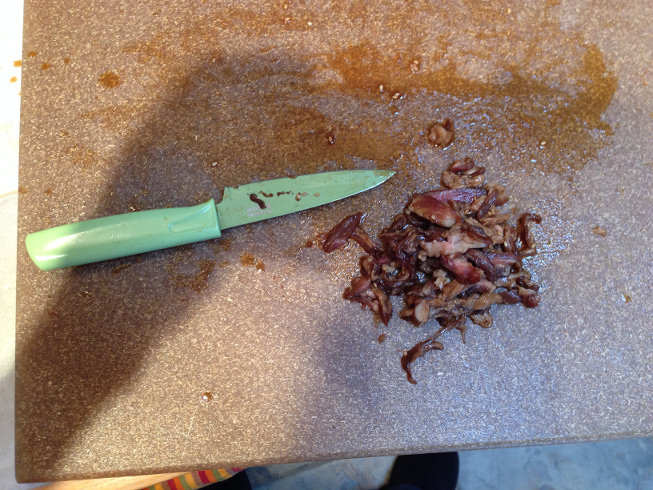 I cut off a pretty significant amount of fat, but could tell that the meat was fairly marbled still. The fat that remained was buried deep inside the meat so I decided to let it be and see what happened.

Here is the jerky now in the racks, ready to be dehydrated. I must say at this point it smelled pretty good. Notice how fatty the meat looks still even after all that I've removed. This was my first clue that I likely need a different cut of meat. 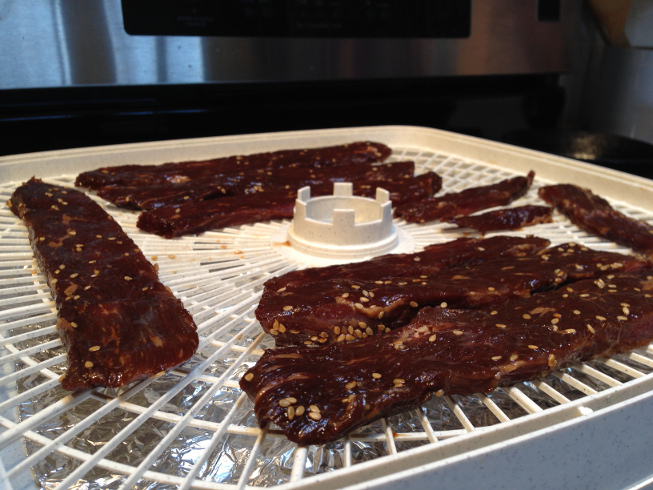 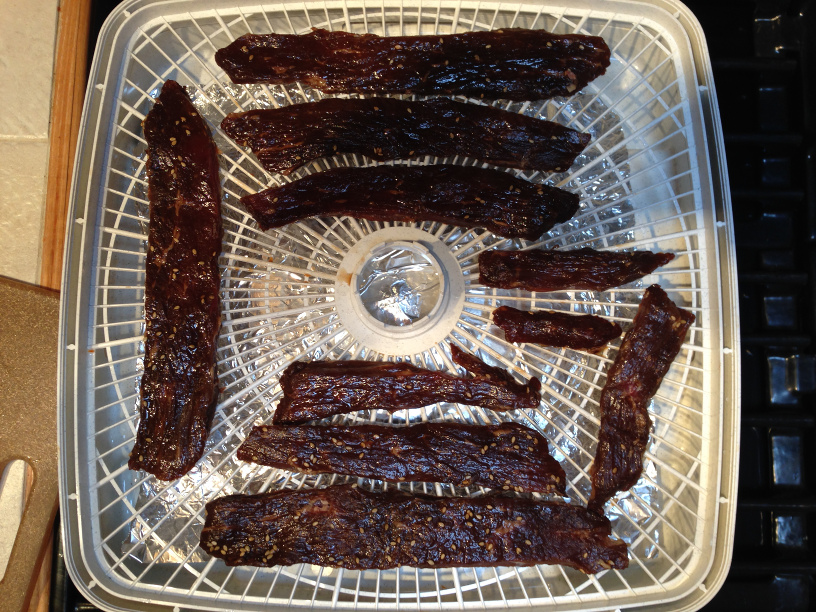 I kicked off the dehydrator, sat back, and an hour and a half later the power to our whole house went out. *sad face*

Since I didn't want the meat (not yet jerky at this point) to be sitting at room temperature I moved the whole dehydrator into the oven to try to keep it as warm as possible. When it became clear that the power wasn't coming back on anytime soon, I took the rack out and put it in the fridge. Two hours later we had power restored just as we were heading out.

Total dehydraing time (in starts and stops) was seven and a half hours.

I wasn't sure how to tell when the jerky was done. Online articles say to bend it and if it starts to crack (but not break), then you know it's done. None of my pieces were cracking at all and seemed to only become more rubbery and time went on. After a while Liz just looked at me and said "it's done". I don't remember reading about that particlay method online but I felt like I should listen.

Here is the result. 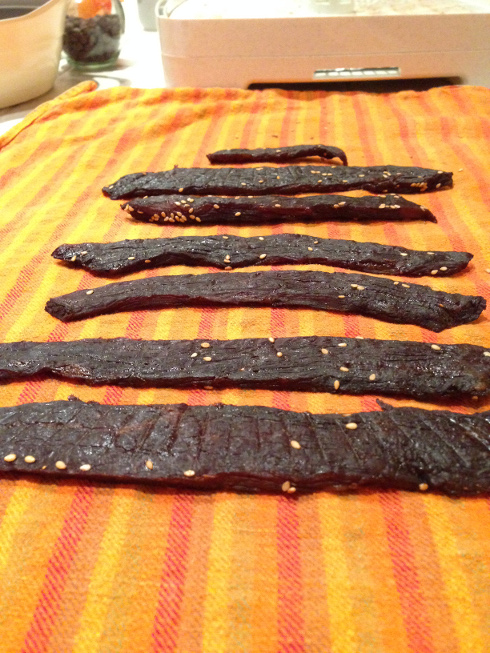 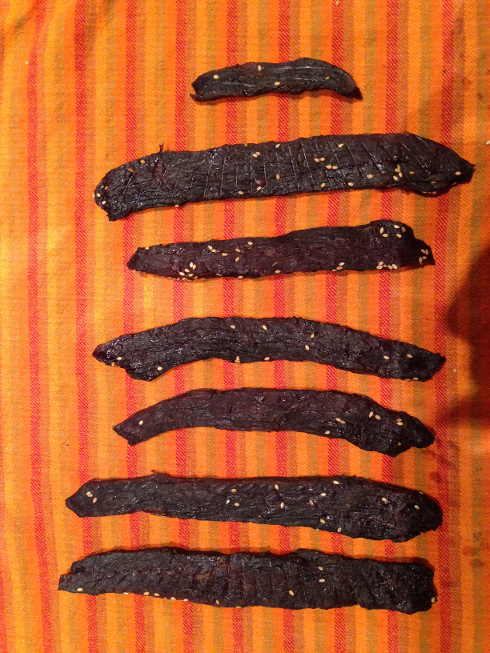 We each ate a piece of the jerky and it was pretty tough, both to rip and to chew. If I'm being honest, I feel like I've created the first ever meat popsicles, since you really end up sucking on them as you try to rip off a piece. Overall I'd give it a 4/10. Its edible, just not totally enjoyable.

We've taken all of it and bottled it up. Now I have a snack to offer unsuspecting guests! 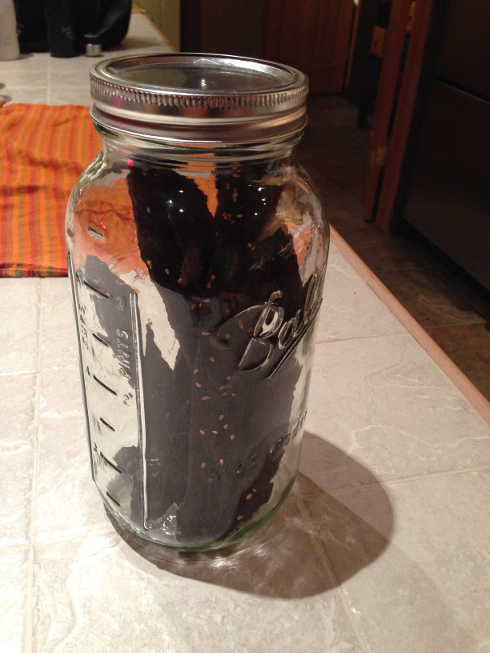 me so on fire

Tomorrow will mark the first week that Liz and I will have been in Montana. I only realized that…