So yesterday I turned 30.

I had hoped to have some time to think through what that meant for me, how I felt about it, and to process what it means to enter into a new decade of my life. With all that’s been going on with Liz and I and our trip to France, Grand Teton National Park, and recently Missoula, I’ve had not much time to myself. I was able to write most of this yesterday morning because Liz was off to Bozeman to pick up her eldest sister with her two kids and her mom who are staying with us for the week.

Her mom, whose love language is food, gifted us with an amazing Korean feast last night for my birthday. So.Good. 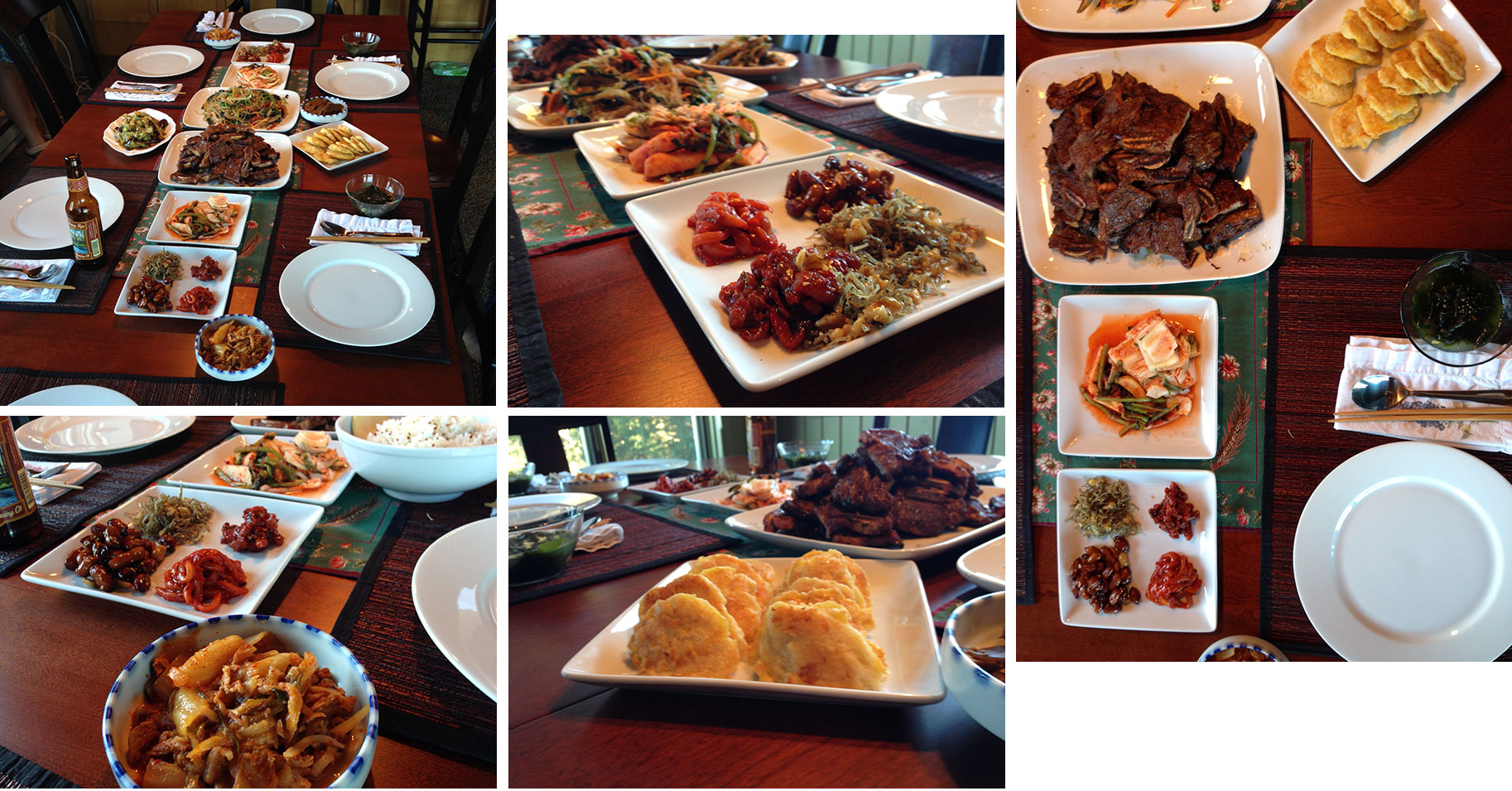 They started when I was in college, beginning my junior year and working on a computer science degree. I’m just realizing that I find myself in this turn of the decade in a very similar position to the last one. I’ve little idea of what I’ll be doing for a living and look at the decade ahead as one with many wonderful possibilities in it.

Things are very different this time around however. I have a wonderful life partner that will walk with me through the ups and downs of the next 10 years and beyond. I’ve amazing friends I’ve spent the last 8 years cultivating who have enriched me beyond my ability to express. I think other major difference is that I’ve made decisions, big decisions, in the last 10 years. I believe that making decisions, whether you feel you made the right or wrong decision, is our primary vehicle for growth. A decision means that something is changing, it will go in one direction or another, but it will not remain the same. So as we make these decisions, we are changed, we are grown, for the better or the worse.

Had I continued on the track I was on before, I believe I would have entered my 30’s with some regret regarding where my life was and where it was heading. I feel like however I’ve managed to sneak in some pretty epic things at the end of my 20’s. I quit my job, got married, moved to a different state, rode my bike 2,000 miles down the Pacific Coast, went to France, hiked for 5 days in the Tetons, started a writing career, and have made the most progress towards crafting a life that I want to live than I have in most of the years before.

I have lost a mother, gained a wife, worked, laughed, cried, traveled, received, given, ached, healed, fed and have been fed, and have been blessed beyond measure. I leave my 20’s a content man, a happy one even, they are a chapter I’ll crack open every once in a while and relive, and enjoy.

I realized two things at the end of my 20’s, lessons that I think will help me navigate the rest of my life.

I learned what it was like to live in, and subsequently break free from, a life that’s directed by fear. I had a great time at my workplace, and I really enjoyed my coworkers, but I was there for the last 3 years mostly out of fear. Fear of leaving the good salary. Fear of discovering that I was worthless outside of the job. Fear of being discovered as worthless. Fear of not having enough money to be comfortable. I was afraid of what lay outside of the life I had constructed, and was holding on so tightly to. A small voice in my heart was saying it was time to change, that it wanted more, and I kept telling it “this is good enough!”. I would not say that now I am fearless, rather that I’m less inclined to allow fear to be a factor in my decision making. I can recognize it now and can actively choose to say that I don’t want this source of influence to get any airtime.

The second lesson I learned is that sometimes you just need to leave a place, even if it’s a good place, in order to be able to change and grow. I realize as time goes by and Liz and I search for a place to set down roots, that what’s important isn’t actually the characteristics of where we live, yes it’s nice to have a city with good amenities and such, but rather the most important thing I did was to leave the Bay Area. That was the important step, deciding where to settle is just the finishing of that move. It was so important for me to leave because I don’t believe I would have grown there, or flourished. My live had too much structure and momentum there, and not necessarily in ways that were life-giving. I would have probably gone to the same church, worshiped in the same way, gone to the same restaurants, lived within the same world of friends, and thought about the same careers. What’s missing from that equation is an almost total lack of decision making. This isn’t an indictment of settling down some where, that’s actually exactly what we’re looking to do now. This is rather a statement that if you’re feeling stuck in life and are needing a change, the single best change you can make, in my experience, is to get up and move away. Yes you might one day return, but you need to really make a major break, to be faced with an ocean of decisions, to be able to truly grow. I think that’s a part of why travel, if it’s within your means to do it, is such a beneficial thing as it places you outside of your comfort zone and forces you to grow.

The hardest thing about leaving is leaving the people. There is usually not a day that goes by where I don’t think about one of the friends I used to be able to so easily see and spend time with. I miss my friends, I really do. It has raised the price of friendship, and in some ways that makes it more sweet, but it is costly, there is no doubt about that. I think shared experience is what forms and grows friendships, and it’s very hard to have mutual experiences when distance separates you. I’m still figuring that one out. I think of family too. Not that Liz or I lived close to our immediate families before, but we certainly live further away now. As we head towards having kids one day, and we see our nieces growing up so fast, the weight of that distance can be be heavy. We miss our families constantly, but feel that where we are is where we need to be for our own growth.

How do I feel about turning 30?

I still feel young. It’s the same me that’s always been with me. In a sense a new decade is starting, and in another it’s only a day that has simply passed. One more grain of sand in my hour glass tumbles down and lands on the spent pile. When people ask I’ll say I’m 30, and will no longer feel that kindred spirit with people in their 20’s… although I don’t think I’ll feel it with people in their 30’s yet either. I’ll be in an in-between state for a while, maybe a year, until my 31st birthday breezes by.

I watched a video yesterday morning Liz made for me that was a compilation of birthday wishes from people in all parts of my life. I wept. Words of affirmation are probably my biggest love language, and I was overwhelmed with the love that was poured out in those videos. As I was watching it I had a thought, which was that we are often the worst judges of how our lives have impacted others. We live in this world, constantly colliding with other human beings, and often we are totally ignorant of that impact. I know how people have affected me, yet find it almost inconceivable that I’ve had any effect on others. I thought of how who I am is actually greater than what I can ever know. I am the summation of the all that goes on inside of me, as well as the impact I have had on those around me throughout my life. That whole second half of the equation is something I realized I am almost entirely blind to, and I wonder how many of us are blind to it as well. We serve purposes greater than our own and yesterday with that video I was able to get a glimpse into that for my own life.

Another feeling I have is the great weight of a decade completed. I can look back now on my 20’s, something I couldn’t fully do as of two days ago. They are a packaged and done deal in my life. How did I spend them? Did I live enough? Did I dare enough? My 20’s are now accountable to the rest of my life for what was done with them. I will carry either pride, regret, joy, or sadness, when I think on them going forward. They are a finished painting that I can now stand back and see in their fullness. I look to the left, to the completed painting of my 20’s, and to the right, to the totally blank canvas of my 30’s. I hope to make from them a beautiful painting. Perhaps one filled with children, with a first home purchase, with a fulfilling career, with friends, food, love, loss, and life richly lived.

Make Yourself Some Food

I was cursed with a mother who could cook. Not only cook but bake as well. My mother chose…